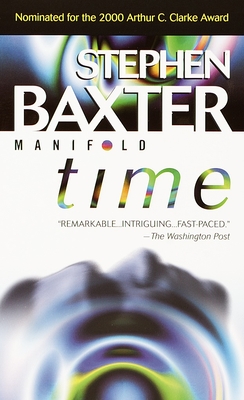 By Stephen Baxter
Please email or call us for pricing on this book.

This is book number 1 in the Manifold series.

“Reading Manifold: Time is like sending your mind to the gym for a brisk workout. If you don’t feel both exhausted and exhilirated when you’re done, you haven’t been working hard enough.”—The New York Times Book Review

The year is 2010. More than a century of ecological damage, industrial and technological expansion, and unchecked population growth has left the Earth on the brink of devastation. As the world’s governments turn inward, one man dares to envision a bolder, brighter future. That man, Reid Malenfant, has a very different solution to the problems plaguing the planet: the exploration and colonization of space. Now Malenfant gambles the very existence of time on a single desperate throw of the dice. Battling national sabotage and international outcry, as apocalyptic riots sweep the globe, he builds a spacecraft and launches it into deep space. The odds are a trillion to one against him. Or are they?

“A staggering novel! If you ever thought you understood time, you’ll be quickly disillusioned when you read Manifold: Time.”—Sir Arthur C. Clarke

Stephen Baxter is a trained engineer with degrees from Cambridge (mathematics) and Southampton Universities (doctorate in aeroengineering research). He has worked with Rolls Royce Ltd., and at the Royal Aircraft Establishment, U.K. In his research, Baxter visited NASA launch centers, viewed a shuttle launch, and interviewed both a NASA mission controller and an astronaut. He also conducted extensive research into the history of NASA, scientific studies of Mars, astronauts, and other key players.

As an acclaimed author, Stephen Baxter is the winner of both The British Science Fiction Award and the Locus Award, as well as being a nominee for an Arthur C. Clarke Award and a Hugo Award. His novel Voyage won the Sidewise Award for Best Alternate History Novel of the Year; he also won the John W. Campbell Award and the Philip K. Dick Award for his novel The Time Ships.

“Reading Manifold: Time is like sending your mind to the gym for a brisk workout. If you don’t feel both exhausted and exhilarated when you’re done, you haven't been working hard enough.”—The New York Times Book Review

“A staggering novel! If you ever thought you understood time, you’ll be quickly disillusioned when you read Manifold: Time.”—Sir Arthur C. Clarke