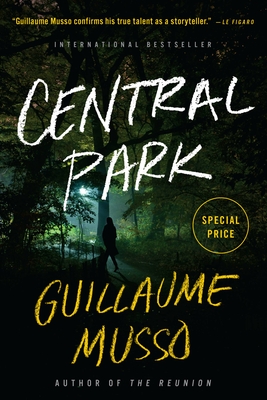 From the #1 international bestselling author: a woman wakes up on a Central Park bench with no memory of how she got there in this “unpredictable and moving psychological thriller that keeps you holding your breath” (Métro)

Alice, a fierce and respected Parisian cop, wakes up on a Central Park bench with no memory of the night before, handcuffed to a complete stranger—a musician named Gabriel. Disoriented, dazed, and with someone else’s blood on her shirt, Alice works furiously to reconnect the dots. She remembers clubbing with her friends the night before on the Champs-Élysées. Gabriel claims he was playing a gig in Dublin. Was she drugged? Kidnapped? Why is the gun in her jacket pocket missing a bullet? And whose blood is on her clothes?

Over the next twenty-four hours, Alice and Gabriel race across New York in search of answers, stumbling upon a startling set of clues that point to a terrible adversary from the past. Alice must finally confront her memories of hunting the serial killer who took everything from her—a man she thought was dead, until now.

From France's #1 bestselling author, Central Park is a taut and suspenseful thriller that will keep readers riveted until its final shocking twist.

Guillaume Musso is the #1 bestselling author in France. He has written seventeen novels, including the thrillers The Reunion, which is in development as an international TV series and Afterwards..., which was made into a feature film starring John Malkovich and Evangeline Lilly. His books have sold more than thirty-five million copies worldwide and have been translated into forty-four languages. He lives in Paris.

“Musso spoons out details and misdirection with brio… the initial conceit provoked plenty of interest… [the] opener is a doozy."—Sarah Weinman, New York Times Book Review

“Sure to please those who like to use reading as their cardio.”—CrimeReads

Praise for The Reunion:

"This immensely satisfying thriller about a prep school scandal and three friends' buried secrets had me turning the pages well into the night. The Reunion has everything a masterful thriller should: gut-wrenching suspense, a twisting story with blindsiding surprises, and a narrator with a mysterious past. It's no wonder that Guillaume Musso is one of France's most loved, bestselling authors."—Harlan Coben

"The French call it a coup de foudre: a strike of lightning. That's how The Reunion zapped me, electrified me. For almost a decade, Guillaume Musso has reigned supreme as France's most popular author, and with this, his American debut, he's instantly poised to join the ranks of Stieg Larsson and Jo Nesbo. The Reunion zigzags so nimbly -- between past and present, from intrigue to terror, amid possible suspects and potential victims -- that you're at very real risk of whiplash. Witty, elegant, and peopled with complex characters, it's one of the most sheerly suspenseful novels I've read in years -- and among the most enjoyable, too."—A.J. Finn, bestselling author of The Woman in the Window

"A fast-paced thriller, set on the Cote d'Azur, packed with a glamorous missing girl, a dead body, and enough references to Twin Peaks and raves and Belle and Sebastian to tickle anybody who came of age in the 1990s... Musso is not just a popular author but the number one bestselling novelist in France. So you're bound to emerge more branché than those people you see on the beach reading home-grown potboilers."—Lauren Mechling, Vanity Fair

"In Musso's masterful plotting, Thomas faces fresh dangers at every turn. The atmospheric finale--which unfolds at Villa Fitzgerald and along Smugglers Way, the coastal path near some of the most lavish properties on the Côte d'Azur--brings shocking revelations."—Jane Ciabattari, BBC.com

"A multi-layered thriller that's fueled by urgency and drama. Guillaume Musso adds a menacing quality to the glamorous Côte d'Azur. With plot twists unleashed at a furious pace, The Reunion is a nightmare set in privileged utopia."—Frank Brasile, Shelf Awareness

"Despite the ticking-clock premise, Musso takes time to set the atmosphere, with lush details that transport the reader to a locale that's at once glamorous and also laced with a deep, abiding sadness."—Crimereads

"Long-buried secrets will give way to the truth in this tragic, riveting, French-Riviera-set story."—Becky Toyne, Globe and Mail

"Intense nostalgia and simmering guilt drive this evocative mystery... Musso moves effortlessly between the violent past and the increasingly dangerous present as complicated relationships and tragic misunderstandings unfold... Readers interested in the dark side of the good life on the Cote d'Azur will be satisfied."—Publishers Weekly