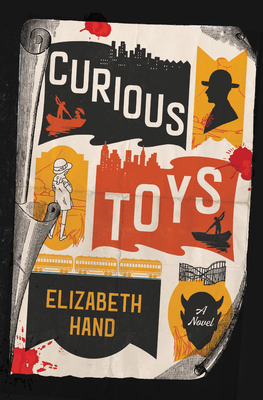 An intrepid young woman stalks a murderer through turn-of-the-century Chicago in "this rich, spooky, and atmospheric thriller that will appeal to fans of Henry Darger and Erik Larson alike" (Sarah McCarry).

In the sweltering summer of 1915, Pin, the fourteen-year-old daughter of a carnival fortune-teller, dresses as a boy and joins a teenage gang that roams the famous Riverview amusement park, looking for trouble.

Unbeknownst to the well-heeled city-dwellers and visitors who come to enjoy the midway, the park is also host to a ruthless killer who uses the shadows of the dark carnival attractions to conduct his crimes. When Pin sees a man enter the Hell Gate ride with a young girl, and emerge alone, she knows that something horrific has occurred.

The crime will lead her to the iconic outsider artist Henry Darger, a brilliant but seemingly mad man. Together, the two navigate the seedy underbelly of a changing city to uncover a murderer few even know to look for.

Elizabeth Hand is the author of more than fifteen cross-genre novels and collections of short fiction. Her work has received the Shirley Jackson Award (three times), the World Fantasy Award (four times), the Nebula Award (twice), as well as the James M. Tiptree Jr. and Mythopoeic Society Awards. She's a longtime critic and contributor of essays for the Washington Post, Los Angeles Times, Salon, Boston Review, and the Village Voice, among many others. She divides her time between the Maine coast and North London.

ONE OF THE YEAR'S BEST BOOKSLitHub * Chicago Public Library * CrimeReads

"Curious Toys is itself like a carnival ride: alternatively dazzling and terrifying, disorienting and marvelous."—Amy Stewart, The Washington Post

"Brilliant, bustling . . . While Hand paces her mystery with classic precision, the real reward of Curious Toys lies in its richly textured panorama of Chicago during a crucial period of change, and in its vivid characters."—Gary Wolfe, Chicago Tribune

"[Pin] is a remarkable young sleuth. . . . Curious Toys is a thriller to be savored-tough, funny, strange, and revelatory."—Michael Berry, Portland Press Herald

"This book contains a rare kind of perfection: Elizabeth Hand's rough, observant magic draws into its circle great historical accuracy, a cross-dressing central protagonist, a wonderfully tender portrait of the great Outsider Artist Henry Darger, a vibrant thriller plot, reflections on gender and its place in civic order, a helpful Ben Hecht, and one of the greatest climactic drop-the-mic moments I've ever read -- and does all this while patiently setting into place the warm emotional armatures that make Curious Toys so moving."—Peter Straub

"Hand is a mage of the page.... [Curious Toys] will enchant those who like tough-girl protagonists and antiheroes, as well as fans of historical crime fiction."—Library Journal (starred review)

"Curious Toys is wonderful! I stayed up late two nights in a row, transported. It will be catnip for readers who love Chicago, circuses, cross-dressers, and early cinema."
—Audrey Niffenegger, bestselling author of The Time-Traveler's Wife

"[Hand] crafts a gritty and winsome character whose sheer determination to catch a murderer makes this mystery novel whiz by."—WBUR

"This atmospheric novel will transport you to a world you've never imagined before."
—Real Simple

"An atmospheric crime novel... A phantasmagoric time trip tailor-made for fans of The Devil in the White City."—Publishers Weekly

"Glittering and scruffy as its carnival setting, with the deep gravity hold of a rollercoaster."—Lauren Beukes, internationally acclaimed author of The Shining Girls and Broken Monsters

"The latest novel from genre-crossing master storyteller Elizabeth Hand journeys from thriller territory straight into the heart of horror . . . A richly layered study of horror and sin and fantasy and reality, all in a peculiarly American vein. And it's scary as hell."—Chicago Review of Books