The Weekend: A Novel (Paperback) 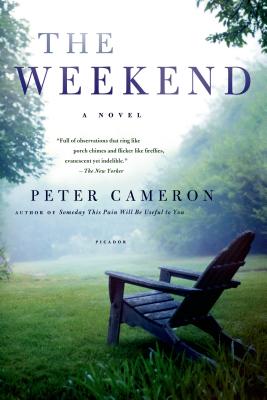 On a midsummer weekend, in a country house in upstate New York, three friends, Lyle, Marian, and John, gather on the anniversary of the death of John's brother, who was also Lyle's lover. As Tony's absence haunts each of them in different ways, the reunion is complicated by the presence of Lyle's new lover, a much younger man named Robert, and a faux-Italian dinner guest with a penchant for truth telling. As the seemingly idyllic weekend proceeds, each character is stripped bare, and old memories and new desires create a chemistry that will transform them all.

Peter Cameron is the author of Andorra (FSG, 1997), The City of Your Final Destination (FSG, 2002), and Someday This Pain Will Be Useful to You (FSG, 2007). His work has appeared in The New Yorker, Grand Street, and The Paris Review. He lives in New York City.

“Full of observations that ring like porch chimes and flicker like fireflies, evanescent yet indelible” —The New Yorker

“A tale of love, mourning, emotional risk-taking and off-center lives . . . It hovers in a corner of your memory for a long, long time.” —Margaria Fichtner, The Miami Herald

“A fascinating literary page-turner . . . We close the novel not only knowing each complicated 'prickly' character better, but also more aware and appreciative of the intricate sculpture that underlies all human social arrangements.” —Michael Dorris, Los Angeles Times

“A novel so moving that, on finishing it, we are convinced that something of importance has taken place. We feel deeply moved, and bereft.” —Francine Prose, The Yale Review