In the Shadow of the Law: A Novel (Paperback) 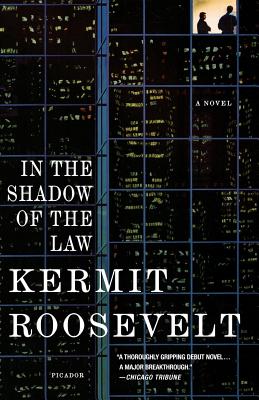 In the Shadow of the Law is the story of Morgan Siler, a powerful Washington, D.C., law firm that has transformed itself from a traditional practice serving those most in need into a shrewd giant serving the interests of the wealthy. Through the intertwined stories of a pro bono murder case and a class action lawsuit brought against a large chemical company, we meet the fascinating, engaging, and conflicted characters that make up this world: Mark Clayton, the rookie; Walker Eliot, the prodigy; Katja Phillips, the idealist; and Harold Fineman, the brilliant and burned-out partner, leader of the chemical company's defense team. With a thorny and breathtakingly paced narrative, In the Shadow of the Law marks the arrival of a writer who "stakes a firm claim to the literary territory of Scott Turow" (The Times-Picayune, New Orleans).

Kermit Roosevelt, author of In the Shadow of the Law, is an assistant professor of law at the University of Pennsylvania Law School. A former clerk to a U.S. Supreme Court justice, he is a graduate of Yale Law School and a member of the Human Rights Advisory Board of Harvard's Kennedy School of Government.

“A nifty legal thriller that relies less on creaky plotting and more on complex and believable characters. . . . Shadow masterfully captures the culture of a legal factory: the competitive atmosphere, the overwhelming workload, and the give-and-take between what is right and what is best for clients.” —Entertainment Weekly (grade: A-)

“An impressive first novel--with emphasis on both adjectives . . . commendable in its perceptive and witty insights into the post-law-school life of big-firm associates . . . The redeeming quality of Roosevelt's utterly realistic characters is that they know exactly what they are doing. Unlike Faust, they are not tricked or even seduced by the princes of darkness in their gentlemanly garb and corner offices. They step onto the treadmill with their eyes wide open and their antennae firmly in place. They, like the author who created them, understand the world of backstabbing and sucking up they are entering. I recognize these characters. . . . I recommend this novel with real enthusiasm.” —Alan M. Dershowitz, The New York Times Book Review

“Perhaps only once a decade does a brilliant young lawyer write a terrific first novel that suddenly announces him as a first-rate storytelling talent while revealing anew the enormous drama hidden within the colossus that we call the American legal system. Kermit Rooselvelt is such a writer, and In the Shadow of the Law is such a book. A tremendous, satisfying read.” —Colin Harrison, author of The Havana Room

“It wouldn't be wrong to call In the Shadow of the Law a legal thriller, but it would sell the book short. There are suspenseful, devious plots aplenty . . . but it's Shadow's cast of characters that will keep you up at night. Roosevelt writes about the law more passionately and entertainingly than anyone since Scott Turow.” —Time

“In the Shadow of the Law offers that profoundly pleasurable experience, traveling a great distance with a writer who has smarts and heart.” —The Times-Picayune (New Orleans)

“The mysteries in each case unfold in clever ways, but the real fizz and pop in In the Shadow of the Law comes from the characters, a surprisingly vivid and idiosyncratic bunch. Roosevelt sketches them with such shrewd, witty aplomb that you feel impatient to get back to them whenever he turns to the plot.” —Laura Miller, Salon.com

“Roosevelt has written--and written well--a thoughtful and disturbing legal thriller that is also a meditation on the law itself.” —St. Louis Post-Dispatch

“This tour of the professions dark side should not be missed.” —The Week

“In this graceful performance, Roosevelt establishes himself as chronicler of the menagerie. . . . [A] hugely readable novel.” —Knight Ridder newspapers

“Remarkable characters . . . he creates an expertly paced, well-written, readable story in which good and bad are nuanced and the law is shown in all its majesty and intricacy.” —Richmond Times-Dispatch

“Fascinating . . . I could not put the book down.” —The Roanoke Times

“A brilliantly funny, acidly accurate riff . . . coupled with a penetrating moral critique of the way we practice now . . . In the Shadow of the Law stands in the shadow of great realist novels like Stendhal's The Red and the Black and Dickens's Bleak House.” —The American Lawyer

“If you recognize yourself in any of the moral-lacking or morale-lacking characters, seek immediate help.” —The Legal Intelligencer

“This outstanding debut . . . offers a fascinating insider's look into the culture of a high-stakes firm, while also presenting a considered meditation on the law itself and its potential to compromise those driven to practice it. Most of all it's the vividness and complexity of the characters--drawn with the precision and authority of a winning legal argument--that heralds the arrival of an exciting new voice.” —Publishers Weekly (starred review)