The Bill of Rights: Creation and Reconstruction (Paperback) 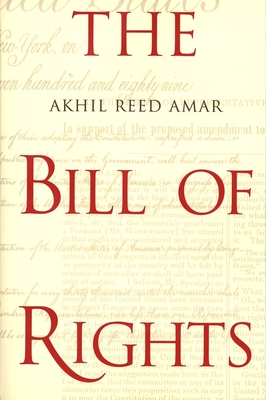 "This is one of the most important books about constitutional interpretation of its generation."—Jeffrey Rosen, American Lawyer

Are the deep insights of Hugo Black, William Brennan, and Felix Frankfurter that have defined our cherished Bill of Rights fatally flawed? With meticulous historical scholarship and elegant legal interpretation a leading scholar of Constitutional law boldly answers yes as he explodes conventional wisdom about the first ten amendments to the U.S. Constitution in this incisive new account of our most basic charter of liberty. Akhil Reed Amar brilliantly illuminates in rich detail not simply the text, structure, and history of individual clauses of the 1789 Bill, but their intended relationships to each other and to other constitutional provisions. Amar’s corrective does not end there, however, for as his powerful narrative proves, a later generation of antislavery activists profoundly changed the meaning of the Bill in the Reconstruction era. With the Fourteenth Amendment, Americans underwent a new birth of freedom that transformed the old Bill of Rights.

We have as a result a complex historical document originally designed to protect the people against self-interested government and revised by the Fourteenth Amendment to guard minority against majority. In our continuing battles over freedom of religion and expression, arms bearing, privacy, states’ rights, and popular sovereignty, Amar concludes, we must hearken to both the Founding Fathers who created the Bill and their sons and daughters who reconstructed it.

Amar’s landmark work invites citizens to a deeper understanding of their Bill of Rights and will set the basic terms of debate about it for modern lawyers, jurists, and historians for years to come.

Akhil Reed Amar is Southmayd Professor of Law at Yale. He is the author of scores of articles on constitutional law and criminal procedure, as well as The Constitution and Criminal Procedure: First Principles, published by Yale University Press.

"Amar takes us on a historical odyssey . . . [He] offer[s] a striking and original analysis of the political values embodied in the amendments enacted to soothe their concerns. . . . In a rich clause-by clause analysis, Amar elaborates his thesis. . . . Amar’s stimulating republican interpretation restores the states and the people to their rightful place in the constitutional story."—James Henretta, New York Times Book Review

"Amar’s historical analysis enables the reader to appreciate the countermajoritarian nature of the document over time. . . . He places legal milestones in an understandable perspective."—Phillip Young Blue, Library Journal

"There are many virtues to this account . . . The Bill of Rights . . . offers a number of striking arguments and claims, many of them original and convincing . . . [It] is especially valuable as an exercise in intellectual history."—Cass R. Sunstein, The New Republic

"As the author of a well-respected textbook on criminal procedure and of many law review articles, Amar is well qualified to present this new look at the nation’s Bill of Rights. . . . The book is carefully written and contains a rich, ample set of footnotes. Highly recommended for upper-division undergraduates, graduate students, and faculty."—Choice

"The dazzling culmination of Amar’s attempt, over the past decade, to rethink constitutional law from the ground up, by distinguishing and synthesizing the lessons of the Founding and Reconstruction. This is one of the most important books about constitutional interpretation of its generation."—Jeffrey Rosen, American Lawyer

"Amar . . . has produced a highly accessible, beautifully written book. . . . Amar . . . provides a rich, generally persuasive historical reconstruction of the framers’ intentions and worldviews by drawing upon their words, common terminology of the era and revered, cognate texts."—Casper O. Grathwohl, America

"Students of constitutional law, history and interpretation will want to read this book. The argumentation is thoughtful, precise, and provocative. Moreover, the book is beautifully written, thoroughly researched, and meticulously referenced. Akhil Reed Amar has produced an impressive piece of scholarship that seems destined to become a staple of the constitutional bibliography."—John M. Scheb, Law and Politics Book Review

"[This book] has already been hailed as a landmark, and deservedly so. Indeed, though it seems hardly possible that any informed person who reads this book will come away agreeing with every word, it seems even less likely that anyone who fails to read this book will be regarded, in the years to come, when the debate turns to the history of the U.S. Constitution, as an informed person."—Christopher C. Faille, Federal Lawyer

"A masterpiece. . . . Meticulously detailed, historically sensitive, and largely persuasive. . . . One of the best books on American constitutionalism published this decade. No one can claim to be an educated member of the constitutional community who has not read it."—Mark A. Graber, University of Richmond Law Review

"One of the best law books of the twentieth century. . . . Professor Amar has brilliantly pointed the way to a sound understanding of many of the most difficult and contentious issues in constitutional theory."—Gary Lawson, University of Richmond Law Review

"By any standard a major contribution to the literature on the Bill of Rights. . . . Skillfully combines historical research and legal analysis to give the reader a variety of fresh, important insights."—Earl M. Maltz, University of Richmond Law Review

"[A] brilliant study of the American Bill of Rights. . . . This is a grand book, broadly and originally conceived, written in clear, jargon-free prose; it is a treat for the layman as well as the specialist."—Joyce Lee Malcolm, American Historical Review

"Amar’s book is more than a tale. With its elegant prose, strict attention to text, lightness of touch, depth of inquiry, startling surprises, perfect pacing, and memorable characters—all converging on a theme of profound importance for the human condition—it reads with the suspense and power of a Greek drama."—International Journal of the Classical Tradition

"A tremendously enjoyable book. . . . This book makes its highly important subject accessible without ever lessening its significance. Amar is sophisticated, brilliant, perceptive, conscientious, and compelling. This book is striking, sweeping, original, stimulating, meticulous, and still fun to read."—Appellate Practice Journal

"It is a rare that a single work can so thoroughly and decisively change the way we look at a document as central to our common political life as the Bill of Rights. With The Bill of Rights: Creation and Reconstruction, Professor Amar has done just that."—Yale Political Quarterly

"Extremely well researched, with over 1,000 footnotes to complement the text and enlighten the reader, Amar’s The Bill of Rights recounts the history, development, and original meaning of the Constitution’s first Ten Amendments with great scholarship and faithfulness to the thoughts, words, and writing of its original Drafters. Highly recommended."—Adam E. Small, New York Law Journal

"[W]ell-written . . . a rich contribution to the historical and theoretical literature of the Constitution and deserves a large readership."—Daniel J. Hulsebosch, Michigan Law Review

"Amar . . . provides a fresh and thoughtful reading of the decalogue of amendments crafted by the First Congress and, as he argues, reformulated by the Thirty-ninth Congress through the Fourteenth Amendment. . . . Vital and important."—David E. Kyvig, Law and History Review

"This is a rich book, not only for its sweep and subject, but because Amar delivers a provocative synthesis of textual, historical, and theoretical interpretation in support of his doctrine of refined incorporation. It deserves to be read by scholars and advanced students, as well as lawyers and judges."—Canadian Journal of Political Science

"The Bill of Rights provides a principled contribution to the debate over the meaning of the Bill of Rights as reconstructed by the Fourteenth Amendment. . . . Amar . . . supplies a defensible alternative to the anti-constitutional theories common among legal elites."—Joseph S. Devaney, University Bookman

A selection of the History Book Club


Selected to receive a Gavel Award Certificate of Merit in the Book Category in the 1999 Competition for the Media and the Arts, given by the American Bar Association

"Amar’s argument is nothing short of brilliant: he recasts our understanding of the Bill of Rights in ways that have profound implications. No one presently writing is better able to combine legal and historical analysis."—Michael Les Benedict, Ohio State University

"By viewing the Bill of Rights as a document with an evolving meaning shaped by history, and by stressing how the Civil War and Reconstruction transformed the Bill of Rights, Amar has made a major contribution to the history of American liberties."—Eric Foner, Columbia University

"Essential reading for anyone who claims to care about the history of liberty in America, from the ACLU to the NRA, from the NAACP to the Federalist Society. Today’s Bill of Rights, Amar shows, owes less to the Founding Fathers of the 1780s and more to the antislavery crusaders of the 1860s—women alongside men, blacks alongside whites--than many of us had realized."—Nadine Strossen, professor, New York Law School and national president, American Civil Liberties Union

"Akhil Amar is one of the most creative thinkers in the legal academy. Not surprisingly, he has produced the best book ever written about what we call the Bill of Rights. He is especially illuminating about the vast differences between the assumptions as to what these amendments meant in 1789 as against their interpretation in 1868, when the framers of the Fourteenth Amendment expected them to be applied against the states."—Sanford Levinson, University of Texas, School of Law