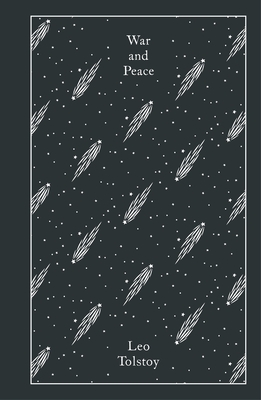 A stunning clothbound Hardcover Classics edition of Tolstoy’s great novel, one of the undisputed masterpieces of world literature. Nominated as one of America’s best-loved novels by PBS’s The Great American Read

At a glittering society party in St. Petersburg in 1805, conversations are dominated by the prospect of war. Terror swiftly engulfs the country as Napoleon’s army marches on Russia, and the lives of three young people are changed forever. The stories of quixotic Pierre, cynical Andrey, and impetuous Natasha interweave with a huge cast, from aristocrats and peasants, to soldiers and Napoleon himself. In War and Peace, Tolstoy entwines grand themes—conflict and love, birth and death, free will and fate—with unforgettable scenes of nineteenth-century Russia, to create a magnificent epic of human life in all its imperfection and grandeur.

Leo Tolstoy (1828–1910) was born in central Russia. After serving in the Crimean War, he retired to his estate and devoted himself to writing, farming, and raising his large family. His novels and outspoken social polemics brought him world fame.

Anthony Briggs (translator) has written, translated, or edited twenty books in the fields of Russian and English literature.

Orlando Figes (introduction) is the prizewinning author of A People’s Tragedy and Natasha’s Dance. He is a regular contributor to the New York Times, the Washington Post, and the New York Review of Books.

“There remains the greatest of all novelists—for what else can we call the author of War and Peace?” —Virginia Woolf