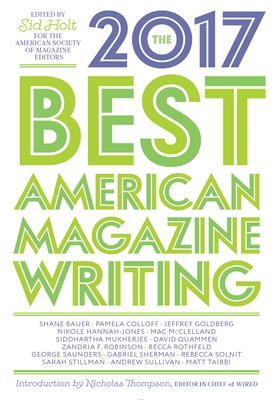 With the work of reporters under fire worldwide, this year's anthology of National Magazine Award finalists and winners is a timely reminder of the power of journalism. The pieces included here explore the fault lines in American society. Shane Bauer's visceral "My Four Months as a Private Prison Guard" (Mother Jones) and Sarah Stillman's depiction of the havoc wreaked on young people's lives when they are put on sex-offender registries (The New Yorker) examine controversial criminal-justice practices. And responses to the shocks of the recent election include Matt Taibbi's irreverent dispatches from the campaign trail (Rolling Stone), George Saunders's transfixing account of Trump's rallies (The New Yorker), and Andrew Sullivan's fears for the future of democracy (New York). In other considerations of the political scene, Jeffrey Goldberg talks through Obama's foreign-policy legacy with the former president (The Atlantic), and Gabriel Sherman analyzes how Roger Ailes's fall sheds light on conservative media (New York). Linking personal stories to the course of history, Nikole Hannah-Jones looks for a school for her daughter in a rapidly changing, racially divided Brooklyn (New York Times Magazine), and Pamela Colloff explores how the 1966 University of Texas Tower mass shooting changed the course of one survivor's life (Texas Monthly). A selection of Rebecca Solnit's Harper's commentary ranges from a writer on death row to the isolation at the heart of conservatism. Becca Rothfeld ponders women waiting on love from the Odyssey to Tinder (Hedgehog Review). Siddhartha Mukherjee depicts the art and agony of oncology (New York Times Magazine). David Quammen ventures to Yellowstone to consider the future of wild places (National Geographic), and Mac McClelland follows a deranged expedition to Cuba in search of the ivory-billed woodpecker (Audubon). The collection concludes with Zandria Robinson's eloquent portrait of her father as reflected in the music he loved (Oxford American).

The American Society of Magazine Editors is the principal organization for magazine journalists in the United States. ASME sponsors the National Magazine Awards in association with the Columbia University Graduate School of Journalism. Sid Holt is chief executive of the American Society of Magazine Editors and a former editor at Rolling Stone and Adweek magazines. Nicholas Thompson was named editor in chief of Wired in 2017. Before joining Wired, Thompson served as editor of NewYorker.com from 2012 to 2017. His 2009 book, The Hawk and the Dove: Paul Nitze, George Kennan, and the History of the Cold War, was published to critical acclaim. Thompson is also a contributor for CBS News and a cofounder of The Atavist, a National Magazine Award-winning digital publication.