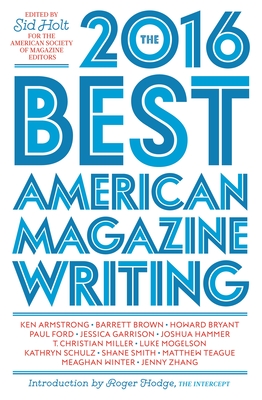 This year's Best American Magazine Writing features outstanding writing on contentious issues including incarceration, policing, sexual assault, labor, technology, and environmental catastrophe. Selections include Paul Ford's ambitious "What Is Code?" (Bloomberg Businessweek), an innovative explanation of how programming works, and "The Really Big One," by Kathryn Schulz (The New Yorker), which exposes just how unprepared the Pacific Northwest is for a major earthquake. Joining them are Meaghan Winter's expos of crisis pregnancy centers (Cosmopolitan) and a chilling story of police prejudice that allowed a serial rapist to run free (the Marshall Project in partnership with ProPublica). Also included is Shane Smith's interview with Barack Obama about mass incarceration (Vice). Other selections demonstrate a range of long-form styles and topics across print and digital publications. The imprisoned hacker and activist Barrett Brown pens hilarious dispatches from behind bars, including a scathing review of Jonathan Franzen's fiction (The Intercept). "The New American Slavery" (Buzzfeed) documents the pervasive exploitation of guest workers, and Luke Mogelson explores the purgatorial fate of an undocumented man sent back to Honduras (New York Times Magazine). Joshua Hammer harrowingly portrays Sierra Leone's worst Ebola ward as even the staff succumb to the disease (Matter). And in "The Friend," Matthew Teague's wife is afflicted with cancer, his friend moves in, and the result is a devastating narrative of relationships and death (Esquire). The collection concludes with Jenny Zhang's "How It Feels," an unconventional meditation on the intersection of teenage cruelty and art (Poetry).

The American Society of Magazine Editors is the principal organization for magazine journalists in the United States. ASME sponsors the National Magazine Awards in association with the Columbia University Graduate School of Journalism. Sid Holt is chief executive of the American Society of Magazine Editors and a former editor at Rolling Stone and Adweek magazines. Roger Hodge is the national editor of The Intercept. He is the author of The Mendacity of Hope: Presidential Power, Corporate Money, and the Politics of Corrupt Influence (2010). Formerly he was editor of the Oxford American and Harper's Magazine. Hodge's writings have appeared in many publications, including Texas Monthly, the London Review of Books, Popular Science, Men's Journal, and Harper's. He is writing a book about life in the West Texas borderlands.