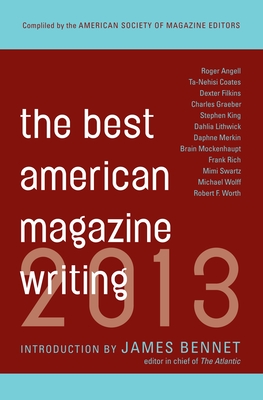 Chosen by the American Society of Magazine Editors, the stories in this anthology include National Magazine Award-winning works of public interest, reporting, feature writing, and fiction. This year's selections include Pamela Colloff (Texas Monthly) on the agonizing, decades-long struggle by a convicted murderer to prove his innocence; Dexter Filkins (The New Yorker) on the emotional effort by an Iraq War veteran to make amends for the role he played in the deaths of innocent Iraqis; Chris Jones (Esquire) on Robert A. Caro's epic, ongoing investigation into the life and work of Lyndon Johnson; Charles C. Mann (Orion) on the odds of human beings' survival as a species; and Roger Angell (The New Yorker) on aging, dying, and loss. The former infantryman Brian Mockenhaupt (Byliner) describes modern combat in Afghanistan and its ability both to forge and challenge friendships; Ta-Nehisi Coates (The Atlantic) reflects on the complex racial terrain traversed by Barack Obama; Frank Rich (New York) assesses Mitt Romney's ambiguous candidacy; and Dahlia Lithwick (Slate) looks at the current and future implications of an eventful year in Supreme Court history. The volume also includes an interview on the art of screenwriting with Terry Southern from The Paris Review and an award-winning short story by Stephen King published in Harper's magazine.

The American Society of Magazine Editors (ASME) is the principal organization for magazine journalists in the United States. ASME sponsors the National Magazine Awards in association with the Columbia University Graduate School of Journalism. Sid Holt is chief executive of the American Society of Magazine Editors and a former editor at Rolling Stone and Adweek Magazines. James Bennet has been the editor in chief of The Atlantic since 2006. Before joining The Atlantic, he was the Jerusalem bureau chief for the New York Times.