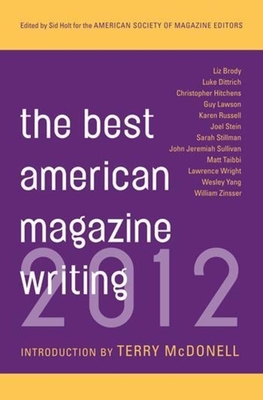 Chosen from the 2012 National Magazine Awards finalists and winners, this anthology is filled with compelling features and profiles, eye-opening reporting, and incisive criticism and analysis of contemporary culture and society. Written by today's leading journalists, the selections cover a range of developments in politics, international affairs, culture, and business--from the increasingly short shelf lives of celebrity marriages to the ongoing fallout from Wall Street's financial malpractice, from the insidious effects of the lingering wars in Iraq and Afghanistan to the resurgent battle over issues pertaining to women's safety and health. Always engaging and informative, Best American Magazine Writing 2012 is an incomparable resource for the most noteworthy journalism and literary achievements of the year. Essays include Lawrence Wright (The New Yorker) on the history of Scientology and recent challenges to its mission and methods; Matthieu Aikins (The Atlantic) on the shady dealings and shifting sands of the war in Afghanistan; the late Christopher Hitchens (Vanity Fair) on the physical and emotional toll of cancer; and Joel Stein (Time) on the propensity for politicians and other popular figures to get into trouble on the Internet. John Jeremiah Sullivan (GQ) immerses himself in David Foster Wallace's curious legacy; Tim Crothers (ESPN) follows the inspiring story of Phiona Mutesi, a chess prodigy from the slums of Uganda; Chris Ballard (Sports Illustrated) recounts Dewayne Dedmon's struggle to reconcile his faith with a career in sports; Wesley Yang (New York) explores the pressure on Asian Americans to succeed and the psychological and cultural consequences when they don't; and Luke Dittrich (Esquire) shares the raw experiences of those who survived one of 2011's worst natural disasters: the tornado that hit Joplin, Missouri. The sparkling dialogue and vividly imagined, eccentric characters of Karen Russell's award-winning short story, "The Hox River Window" (Zoetrope: All-Story), rounds out the collection.

The American Society of Magazine Editors is the principal organization for magazine journalists in the United States. ASME sponsors the National Magazine Awards in association with the Columbia University Graduate School of Journalism. Sid Holt is chief executive of the American Society of Magazine Editors and the former editor in chief of Adweek Magazines. During his seven years as managing editor of Rolling Stone, the magazine was nominated for four and won one National Magazine Award for General Excellence. Terry McDonell began his career in magazines in the mid-1970s. He was one of the launch editors of Outside and the founding editor of Rocky Mountain before joining Rolling Stone as managing editor in 1981, then Newsweek as assistant managing editor in 1983. He launched Smart in 1984 and later edited Esquire, Sports Afield, and Men's Journal before overseeing the relaunch of Us as a weekly in 1999. Appointed managing editor of Sports Illustrated in 2002, he became editor of the Time Inc. Sports Group in 2005. He was elected to the Magazine Editors' Hall of Fame in 2012.