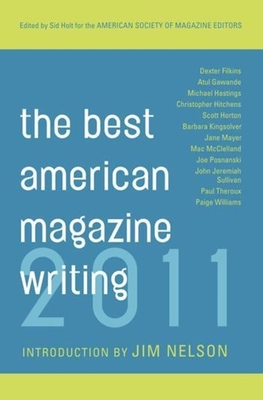 The Best American Magazine Writing 2011 contains award-winning features, exposes, and profiles along with extraordinary commentary, fiction, and poetry from America's leading magazines. This year's selections include stories that not only covered the news but also made news, including Michael Hastings's "The Runaway General," which forced the resignation of General Stanley McChrystal, the U.S. commander in Afghanistan, days after being published in Rolling Stone. Readers will also find Jane Mayer's "Covert Operations" (The New Yorker), which exposed the Koch brothers' campaign against the Barack Obama presidency, turning the duo into a powerful symbol of modern, corporatized politics. The anthology contains Scott Horton's investigation into inmate suicides at Guant namo Bay prison (Harper's Magazine); Christopher Hitchens's wryly moving take on the politics of cancer (Vanity Fair); Jonathan Van Meter's eye-opening portrait of Joan Rivers and her transgressive comedic genius (New York Magazine); and Jonah Weiner's extraordinary musical biography of Kanye West, assembled from the artist's tweets and blog posts (Slate). John Donvan and Caren Zucker describe the world's first autism case in The Atlantic; Atul Gawande shares the modern medical profession's poignant struggle with death and dying in The New Yorker; and Paul Theroux spins a thrilling tale in the Virginia Quarterly Review of a mad collector who acquires works of art only to destroy them. Read together or one at a time, these pieces exemplify the wholly immersive experience of well-crafted magazine writing.

The American Society of Magazine Editors is the principal organization for magazine journalists in the United States. ASME sponsors the National Magazine Awards in association with the Columbia University Graduate School of Journalism. Sid Holt is chief executive of the American Society of Magazine Editors and the former editor in chief of Adweek Magazines. During his seven years as managing editor of Rolling Stone, the magazine was nominated for four and won one National Magazine Award for General Excellence. Jim Nelson has been editor in chief of GQ since 2003. Under his direction, the magazine has been nominated for twenty-six National Magazine Awards and won for feature writing, photography, and general excellence, the highest honor in the industry.