The Accidental Guerrilla: Fighting Small Wars in the Midst of a Big One (Paperback) 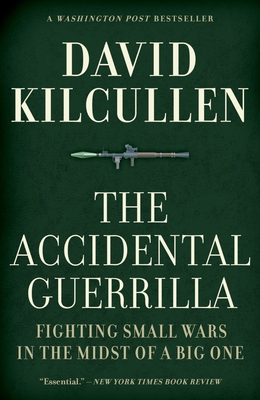 David Kilcullen is one of the world's most influential experts on counterinsurgency and modern warfare, a ground-breaking theorist whose ideas "are revolutionizing military thinking throughout the west" (Washington Post). Indeed, his vision of modern warfare powerfully influenced America's decision to rethink its military strategy in Iraq and implement "the Surge," now recognized as a dramatic success.
In The Accidental Guerrilla, Kilcullen provides a remarkably fresh perspective on the War on Terror. Kilcullen takes us "on the ground" to uncover the face of modern warfare, illuminating both the big global war (the "War on Terrorism") and its relation to the associated "small wars" across the globe: Iraq, Afghanistan, Indonesia, Thailand, the Pakistani tribal zones, East Timor and the horn of Africa. Kilcullen sees today's conflicts as a complex interweaving of contrasting trends--local insurgencies seeking autonomy caught up in a broader pan-Islamic campaign--small wars in the midst of a big one. He warns that America's actions in the war on terrorism have tended to conflate these trends, blurring the distinction between local and global struggles and thus enormously complicating our challenges. Indeed, the US had done a poor job of applying different tactics to these very different situations, continually misidentifying insurgents with limited aims and legitimate
grievances--whom he calls "accidental guerrillas"--as part of a coordinated worldwide terror network. We must learn how to disentangle these strands, develop strategies that deal with global threats, avoid local conflicts where possible, and win them where necessary.
Colored with gripping battlefield experiences that range from the jungles and highlands of Southeast Asia to the mountains of the Afghanistan-Pakistan border to the dusty towns of the Middle East, The Accidental Guerrilla will, quite simply, change the way we think about war. This book is a must read for everyone concerned about the war on terror.

David Kilcullen was formerly counterinsurgency advisor to General David Petraeus in Iraq and to the NATO Security Assistance Force in Afghanistan, and currently serves as a consultant to the U.S. government. Kilcullen is also Adjunct Professor of Security Studies at the Johns Hopkins School of Advanced International Studies and a Fellow at the Center for a New American Security.