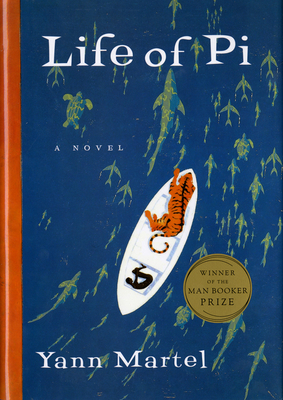 A MODERN CLASSIC AND INTERNATIONAL BESTSELLER

WINNER OF THE MAN BOOKER PRIZE

"A story to make you believe in the soul-sustaining power of fiction."—Los Angeles Times Book Review

After the sinking of a cargo ship, a solitary lifeboat remains bobbing on the wild blue Pacific. The only survivors from the wreck are a sixteen-year-old boy named Pi, a hyena, a wounded zebra, an orangutan—and a 450-pound Royal Bengal tiger.

Soon the tiger has dispatched all but Pi Patel, whose fear, knowledge, and cunning allow him to coexist with the tiger, Richard Parker, for 227 days while lost at sea. When they finally reach the coast of Mexico, Richard Parker flees to the jungle, never to be seen again.

The Japanese authorities who interrogate Pi refuse to believe his story and press him to tell them "the truth." After hours of coercion, Pi tells a second story, a story much less fantastical, much more conventional—but is it more true?

Life of Pi is at once a realistic, rousing adventure and a meta-tale of survival that explores the redemptive power of storytelling and the transformative nature of fiction. It's a story, as one character puts it, to make you believe in God.

YANN MARTEL was born in Spain in 1963 of Canadian parents. Life of Pi won the 2002 Man Booker Prize (among other honors) and was adapted to the screen in the Oscar-winning film by Ang Lee. Martel is also the author of the novels The High Mountains of Portugal, Beatrice and Virgil, and Self, the collection of stories The Facts Behind the Helsinki Roccamatios, and a collection of letters to the prime minister of Canada, What Is Stephen Harper Reading?. He lives in Saskatchewan, Canada.

"Let me tell you a secret: the name of the greatest living writer of the generation born in the sixties is Yann Martel."--L'Humanité

"A story to make you believe in the soul-sustaining power of fiction and its human creators, and in the original power of storytellers like Martel." -- Los Angeles Times Book Review
“If this century produces a classic work of survival literature, Martel is surely a contender.’--The Nation
"Beautifully fantastical and spirited." -- Salon

"[Life of Pi] could renew your faith in the ability of novelists to invest even the most outrageous scenario with plausible life." -- The New York Times Book Review

"Audacious, exhilarating . . . wonderful. The book's middle section might be the most gripping 200 pages in recent Canadian fiction. It also stands up against some of Martel's more obvious influences: Edgar Allen Poe's The Narrative of Arthur Gordon Pym, the novels of H. G. Wells, certain stretches of Moby Dick."--Quill & Quire
—