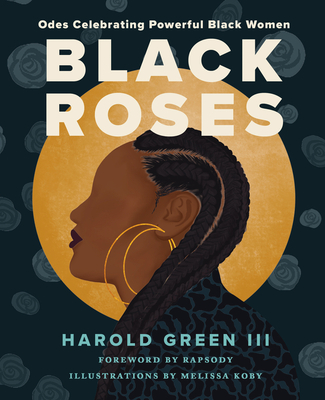 The poet and founder of the music collective Flowers for the Living pays tribute to all Black women by focusing on visionaries and leaders who are making history right now, including Ava DuVernay, Janelle Monae, Kamala Harris, Misty Copeland, Nikole Hannah-Jones, Robin Roberts, Roxane Gay, and Simone Biles—with this compilation of celebratory odes featuring full-color illustrations by Melissa Koby.

Black women are exceptional. To honor how Black women use their minds, talent, passion, and power to transform society, Harold Green began writing love letters in verse which he shared on his Instagram account. Balm for our troubled times, his tributes to visionaries and leaders quickly went viral and became a social media sensation. Now, in this remarkable collection, Green brings together many of these popular odes with never-before-seen works.

A timely celebration of contemporary Black figures who are making history and shaping our culture today, Black Roses is divided into five sections—advocates, curators, innovators, luminaries, trailblazers—reflecting the diversity of Black women’s achievements and the depth of their reach. These inspiring changemakers are leaving their mark on the world by creating new beauty in their respective art forms, heading movements, fighting for equality and to change the status quo, and championing new definitions of what’s possible in every meaningful way. Green lifts them up to create meaningful connections between these figures and our own lives and experiences.

Harold Green III is an ever-evolving and internationally admired artist and the author of Black Roses and Black Oak. Using poetry as his central art form, he is a highly sought-after talent, bandleader, and event producer. He earned the prestigious Carl Sandburg Literary Award for his self-published debut poetry collection From Englewood, with Love. Green was a featured artist at the Chicago Mayoral Inauguration and the Illinois Holocaust Museum and has appeared on TEDx and at Aspen Ideas Festival. He has created commissioned work in partnership with major brands and organizations, including Nike, Lululemon, Jordan, Google, Chicago Public Schools, and the Chicago Transit Authority. Green has featured in the New York Times, Chicago Tribune, Chicago Sun-Times, online on The Ellen DeGeneres Show Blog, Ebony Web, Black America Web, Windy City Live, and Black Enterprise Web. He lives in Chicago, Illinois.