Don't Know Much About® History [30th Anniversary Edition]: Everything You Need to Know About American History but Never Learned (Paperback) 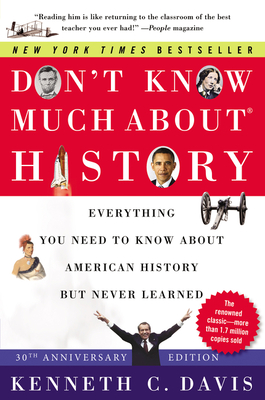 “Reading Davis is like returning to the classroom of the best teacher you ever had!” —People magazine

From the arrival of Columbus through the historic election of Barack Obama and beyond, Kenneth C. Davis carries readers on a rollicking ride through more than five hundred years of American history. In this 30th anniversary edition of the classic anti-textbook—which includes a new preface by Davis—he debunks, recounts, and serves up the real story behind the myths and fallacies of American history.

Kenneth C. Davis is the New York Times bestselling author of A Nation Rising; America's Hidden History; and Don't Know Much About® History, which spent thirty-five consecutive weeks on the New York Times bestseller list, sold more than 1.7 million copies, and gave rise to his phenomenal Don't Know Much About® series for adults and children. A resident of New York City and Dorset, Vermont, Davis frequently appears on national television and radio and has been a commentator on NPR's All Things Considered. He blogs regularly at www.dontknowmuch.com.

“Quirky, sardonic, accurate, rudimentary and often amusing . . . a breezy question-and-answer approach that is far removed from the massive textbooks all of us once lugged around.”
— Atlanta Journal and Constitution

“If you’ve always wondered exactly what Boss Tweed bossed and what Tammany Hall was, Davis is your man.”
— Washington Post Book World

“Davis writes with humor, he can turn a fine phrase. . . . If history were usuallytaught this way, we wouldn’t have to worry about the dosing of the American mind.”
— Booklist

“Unquestionably a handy reference book. It’s just the thing when your pesky school-age kids try to show you up at homework time.”
— Dallas News

“A book that not only fills in gaps in historical knowledge, but is genuinely entertaining. . . . Wonderful!”
— Orlando Sentinel