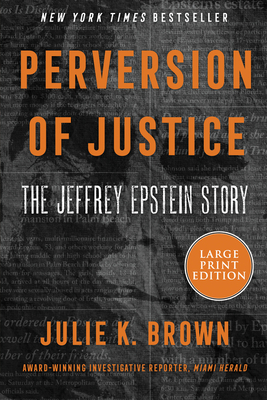 “Julie K. Brown's important book offers not just a definitive account of the Epstein case, but a compelling window into her own experiences as a dogged reporter at a regional newspaper, facing off against powerful interests set against her reporting.” —Ronan Farrow, Pulitzer Prize-winning author of Catch and Kill

Dauntless journalist Julie K. Brown recounts her uncompromising and risky investigation of Jeffrey Epstein's underage sex trafficking operation, and the explosive reporting for the Miami Herald that finally brought him to justice while exposing the powerful people and broken system that protected him.

For many years, billionaire Jeffrey Epstein's penchant for teenage girls was an open secret in the high society of Palm Beach, Florida and Upper East Side, Manhattan. Charged in 2008 with soliciting prostitution from minors, Epstein was treated with unheard of leniency, dictating the terms of his non-prosecution. The media virtually ignored the failures of the criminal justice system, and Epstein's friends and business partners brushed the allegations aside. But when in 2017 the U.S Attorney who approved Epstein's plea deal, Alexander Acosta, was chosen by President Trump as Labor Secretary, reporter Julie K. Brown was compelled to ask questions.

Despite her editor's skepticism that she could add a new dimension to a known story, Brown determined that her goal would be to track down the victims themselves. Poring over thousands of redacted court documents, traveling across the country and chasing down information in difficulty and sometimes dangerous circumstances, Brown tracked down dozens of Epstein's victims, now young women struggling to reclaim their lives after the trauma and shame they had endured.

Brown's resulting three-part series in the Miami Herald was one of the most explosive news stories of the decade, revealing how Epstein ran a global sex trafficking pyramid scheme with impunity for years, targeting vulnerable teens, often from fractured homes and then turning them into recruiters. The outrage led to Epstein's arrest, the disappearance and eventual arrest of his closest accomplice Ghislaine Maxwell, and the resignation of Acosta. The financier's mysterious suicide in a New York City jail cell prompted wild speculation about the secrets he took to the grave-and whether his death was intentional or the result of foul play.

Tracking Epstein’s evolution from a college dropout to one of the most successful financiers in the country—whose associates included Donald Trump, Prince Andrew, and Bill Clinton—Perversion of Justice builds on Brown's original award-winning series, showing the power of truth, the value of local reportage and the tenacity of one woman in the face of the deep-seated corruption of powerful men.

Julie K. Brown is an investigative reporter with the Miami Herald. During her 30-year career, she has worked for a number of newspapers, focusing on crime, justice and human rights issues. As a member of the Herald’s prestigious Investigative Team, she has won dozens of awards, including a George Polk Award in 2018 for “Perversion of Justice,” a series that examined how a rich and powerful sex trafficker, Jeffrey Epstein, managed to arrange a secret plea deal and escape life in prison -- even though he was suspected of sexually abusing more than 100 underage girls and young women. The series, and her subsequent dogged coverage of the case in 2019, led to the resignation of President Trump’s labor secretary, Alex Acosta, Epstein’s arrest on new federal charges in New York and reforms in the way that prosecutors treat victims of sex crimes.

Brown previously won acclaim for a series of stories about abuses and corruption in Florida prisons. The stories led to the resignations of top agency officials, firings of corrupt corrections officers and an overhaul in the treatment of inmates with mental and physical disabilities, as well as women in Florida prisons. That series also won a Polk Award. A native of Philadelphia, she is a graduate of Temple University.

"A gripping journalistic procedural. . . Spotlight meets Erin Brockovitch. . . Brown's book is richer for including lots of reportorial impasses and rabbit holes; it shows what a painstaking and often maddening process investigative journalism is." — Michelle Goldberg, The New York Times

"Julie K. Brown's important book offers not just a definitive account of the Epstein case, but a compelling window into her own experiences as a dogged reporter at a regional newspaper, facing off against both powerful interests set against her reporting, and a wider moment in which local news is a precious and vanishing resource. The book is subtitled "The Jeffrey Epstein Story," but its lessons about courage in the face of adversity, and the crucial role of journalism in holding the powerful to account, go far beyond that case." — Ronan Farrow, Pulitzer Prize-winning author of Catch and Kill

"Class, as much as the dismal state of journalism, is the great undercurrent in Perversion of Justice and gives this scrappy book its heart." — Laura Miller, Slate

"Brown pulls back the curtain on her life behind the headlines." — Daily Beast

"[Brown's] description of both the hard work of investigation and the perilous current state of newspapers adds an important dimension to the story." — Tampa Bay Times