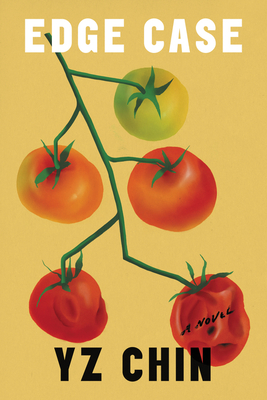 When her husband suddenly disappears, a young woman must uncover where he went—and who she might be without him—in this striking debut of immigration, identity, and marriage.

After another taxing day as the sole female employee at her New York City tech startup, Edwina comes home to find that her husband, Marlin, has packed up a suitcase and left. The only question now is why. Did he give up on their increasingly hopeless quest to secure their green cards and decide to return to Malaysia? Was it the death of his father that sent him into a tailspin? Or has his strange, sudden change in personality finally made Marlin and Edwina strangers to each other?

As Edwina searches the city for traces of her husband, she simultaneously sifts through memories of their relationship, hoping to discover the moment when something went wrong. All the while, a coworker is making increasingly uncomfortable advances toward her. And she can’t hide the truth about Marlin’s disappearance from her overbearing, eccentric mother for much longer. Soon Edwina will have to decide how much she is willing to sacrifice in order to stay in her marriage and in America.

Poignant and darkly funny, Edge Case is a searing meditation on intimacy, estrangement, and the fractured nature of identity. In this moving debut, YZ Chin explores the imperfect yet enduring relationships we hold to country and family.

“Chin’s specificity and wonderfully drawn minor characters add depth and richness…. Not only a subtly provocative depiction of the tech industry, and this country, as tilting ever more off-kilter; but also a realistic portrayal of a woman in crisis.”  —Lauren Oyler, The New York Times Book Review

YZ Chin is the author of Edge Case and the story collection Though I Get Home, which won the Louise Meriwether First Book Prize and the Asian/Pacific American Award For Literature Honor Title. Her writing has been published in Harvard Review, Gulf Coast, Somesuch Stories, Electric Literature, Lit Hub, and elsewhere. Born and raised in Malaysia, she now lives in New York, where she worked most recently as a software engineer.

“Edge Case is a wonderful novel, smart but not showy, emotional but not sentimental. It asks us to examine a broken society that most of us have helped create, either by our actions or our apathy, and to consider what we'd do when someone we loved has changed irrevocably. It would be a massive understatement to call Chin a writer to watch; she's fully formed, beyond talented, and — crucially — an author of deep compassion.”
— NPR

“Chin’s specificity and wonderfully drawn minor characters add depth and richness…. What emerges is not only a subtly provocative depiction of the tech industry, and this country, as tilting ever more off-kilter; but also a realistic portrayal of a woman in crisis.”
— The New York Times Book Review


“Chin writes about both the bright absurdities of modern tech-bro culture and the sharper stings of private heartache and displacement with bristling wit and vulnerability.”
— Entertainment Weekly

"'Edge Case' delves deeper than your typical missing person’s mystery. It’s also a book about a woman trying to understand who she is on her own and where she belongs in the world.... Chin is interested in the idea of home as both a cherished place and a complicated destination. 'Edge Case' doesn’t lack for interesting characters and complications, which Chin spreads generously throughout the novel.... The result is a touching, introspective story about identity, belonging and the effects of long-term transience on both the heart and soul.”
— Washington Post

“One of the first great novels to examine the grinding effect of U.S. anti-immigration policies during the Trump administration…. [Chin] is superb at describing the tumult of a woman being psychologically knocked about like a pachinko ball. Every chapter bears witness to Edwina’s pain, befuddlement and sheer exhaustion, while also revealing her snarky sense of humor, resourcefulness, tenaciousness and capacity for love. Edge Case shows what can happen to ordinary people when they’re caught up in systems beyond their control.”
— BookPage

“A quirky exploration of marriage, immigration, identity…. Her voice from the edge — perceptive, funny, introspective, smart, wry, calling to us from the margins — is one worth listening to.”
— Washington Independent Review of Books

“Chin makes an impressive debut with this sharp take on faltering romance, the American dream, and self-realization….Edwina’s wry outlook and wrestling with thoughts about what it means to make it in America will resonate with readers. Those who enjoy the work of Charles Yu should take a look.”
— Publishers Weekly

“YZ Chin’s eerie and brilliant novel looks closely and tenderly at the margins of life for answers to pressing questions of love and self. Where do I belong? Who am I in the face of loss? What am I willing to do for my precarious place in this world? The result is a totally engaging and emotionally resonant story of one woman’s alienation, ambivalence, defiance, and humor in the face of turmoil—I won’t soon forget it and can’t wait to read what Chin writes next.”
— Alexandra Chang, author of Days of Distraction

“A quirky story of loss and limbo, Edge Case immerses us in the worries, hopes, and absurdities of life on a work visa in America. As a woman’s marriage disintegrates, YZ Chin examines her complicated, ambivalent quest for American citizenship and lays bare her indelible feelings of foreignness and unbelonging. This is a timely, intimate novel unlike any I've read.”
— Chia-Chia Lin, author of The Unpassing