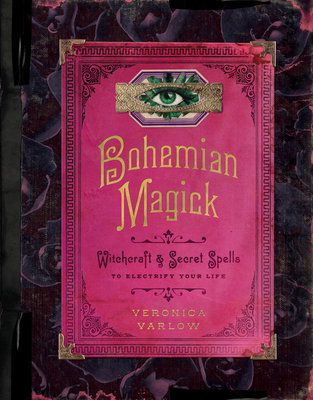 “The remarkable Veronica Varlow seizes life with both hands and bends it to her will. Learn from her.” —Neil Gaiman

In Bohemian Magick, Veronica Varlow, the last daughter in a line of Bohemian witches, weaves together witchcraft knowledge and ancient secret spells with an exotic rock-and-roll magick style that has earned her a devoted following worldwide. This beguiling grimoire-style guide is filled with potent, never-before-revealed spells, hand-written rituals, magick ephemera, hand-drawn sigils, potions, charms, and rhyming incantations that will call your power back to you and electrify your life!

With more than 150 illustrations—drawings, photography, and vintage art—and text written in her own hand, this sumptuous companion is brimming with spells for everlasting confidence, radiant self-love, healing, manifesting your dreams, and love with a desired partner. Veronica calls upon the ancient and hidden Czech-Romani magic passed down to from her grandmother Helen’s lineage and infuses it with her own signature sorcery to help you awaken and amplify your truest self. Each spell that you cast, each potion that you brew, and each chant you speak into the universe will rouse the most powerful part of your being!

In Part I, The School of Spectaculus, Veronica reveals, step by step, her personally crafted steps to spellcasting with power. She shares her secrets regarding writing and preparing for spells, calling on ancestors to give your spells oomph, and writing your own badass spells. She also provides information on when to cast spells and other basics that you need to know to perform the mind-blowing rituals she introduces in Part II.

In Part II, Initiations, she introduces you to the hidden magick of Bohemia. She leads you on five initiations, each focused on specific themes including self-love, sizzling confidence, healing, juicy mojo, and love.

Each initiation begins with an experiential journey of discovery, a story in which you are the protagonist, whether following a trail of candles through a dark wood to a river filled with tiny message-filled paper boats or venturing into a tarot parlor on a hot, sultry night to meet a Witch who has come back from the Afterlife to help you find true love.

And, of course, each initiation includes spells with a rock and roll vibe, such as:

For each badass bewitching enchantment, Veronica explains its importance, the purpose of practice, and the necessary tools and preparation you’ll need to cast it correctly.

With Bohemian Magick, you’ll discover your adventurous side and your own unique magick. Get ready to rise up, call your power back to you, realize your purpose, and make your life story truly legendary!

Veronica Varlow is the last of a line of Bohemian Witches, a fourth-generation intuitive, and an international burlesque showgirl. She is a confidence and sensuality coach who has been featured on the Tonight Show, Playboy, CNN, and MTV in 150 countries worldwide. Veronica and her husband, David Garfinkel-Varlow, established the branch of Witchcraft known as Spectaculus, an intersection of the Bohemian magick legacy of Veronica’s grandmother Helen and Garfinkel-Varlow’s rock-and-roll pagan practices, which stem from natural mysticism and instinctive creativity. Veronica is also one of the cofounders of the infamous Chelsea Hotel Coven in New York City and the founder of Witch Camp, held at the Magick House in Woodstock, New York. Her client list includes Chanel, Tiffany & Co., Vogue, Marc Jacobs, Creative Time with David Byrne, and the Whitney Museum of American Art. She performs love rituals, couples’ rituals, and healing rituals all over the underground art scene in New York City at events curated by House of Yes, Shanghai Mermaid, Dances of Vice, Lust, Vox Noctem, and You Are So Lucky. She also writes a regular column called “Life of a Love Witch” for Enchanted Living magazine. Veronica lives in Brooklyn, crafting spells and making magick with David and her Familiar, the half-wolf half-chihuahua known as Niney.