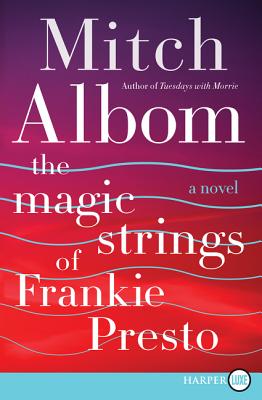 By Mitch Albom
Please email or call us for pricing on this book.

Mitch Albom creates his most unforgettable fictional character—Frankie Presto, the greatest guitarist to ever walk the earth—in this magical novel about the bands we join in life and the power of talent to change our lives.

In his most stunning novel yet, the voice of Music narrates the tale of its most beloved disciple, young Frankie Presto, a war orphan raised by a blind music teacher in a small Spanish town. At nine years old, Frankie is sent to America in the bottom of a boat. His only possession is an old guitar and six precious strings.

But Frankie’s talent is touched by the gods, and his amazing journey weaves him through the musical landscape of the 20th century, from classical to jazz to rock and roll, with his stunning talent affecting numerous stars along the way, including Hank Williams, Elvis Presley, Carole King, Wynton Marsalis and even KISS.

Frankie becomes a pop star himself. He makes records. He is adored. But his gift is also his burden, as he realizes, through his music, he can actually affect people’s futures—with one string turning blue whenever a life is altered.

At the height of his popularity, Frankie Presto vanishes. His legend grows. Only decades later, does he reappear—just before his spectacular death—to change one last life.

With its Forest Gump-like romp through the music world, The Magic Strings of Frankie Presto is a classic in the making. A lifelong musician himself, Mitch Albom delivers a remarkable novel, infused with the message that “everyone joins a band in this life” and those connections change us all.

“Albom’s fable about the power of song carries you along like a beautiful melody.” — People

“Albom’s The Magic Strings of Frankie Presto hits the right notes. Albom’s love for music is richly apparent... and his maxims about life will no doubt bring readers on a pleasantly sentimental journey about the bandmates in their lives.” — USA Today

“A beautiful story that forces us to think about the concept of a life well lived…Albom brings his literary magic once again.” — Huffington Post

“Albom can say in one sentence what others can spend a lifetime trying to convey.” — The Book Wheel

“Within a few pages, you’ll be as delighted with this sparkling book as I was. Start it, stick with it, and you’ll find ’The Magic Strings of Frankie Presto to be a book of note.” — Yankton Daily Press

“As always, Albom’s novel has a larger message...and The Magic Strings of Frankie Pesto resonates with a kind of cosmic connection.” — Miami New Times

“What an entertainer! Mitch Albom, author, playwright, screenwriter, nationally syndicated columnist - and philanthropist, as his audience learned, was a charmer…There seemed to be no end to this man’s talents.” — NorthJersey.com