Israel: A Concise History of a Nation Reborn (Hardcover) 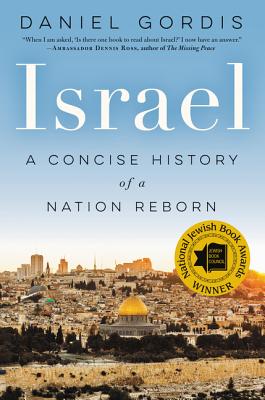 By Daniel Gordis
Please email or call us for pricing on this book.

Winner of the Jewish Book of the Year Award

The first comprehensive yet accessible history of the state of Israel from its inception to present day, from Daniel Gordis, "one of the most respected Israel analysts" (The Forward) living and writing in Jerusalem.

Israel is a tiny state, and yet it has captured the world’s attention, aroused its imagination, and lately, been the object of its opprobrium. Why does such a small country speak to so many global concerns? More pressingly: Why does Israel make the decisions it does? And what lies in its future?

We cannot answer these questions until we understand Israel’s people and the questions and conflicts, the hopes and desires, that have animated their conversations and actions. Though Israel’s history is rife with conflict, these conflicts do not fully communicate the spirit of Israel and its people: they give short shrift to the dream that gave birth to the state, and to the vision for the Jewish people that was at its core. Guiding us through the milestones of Israeli history, Gordis relays the drama of the Jewish people’s story and the creation of the state. Clear-eyed and erudite, he illustrates how Israel became a cultural, economic and military powerhouse—but also explains where Israel made grave mistakes and traces the long history of Israel’s deepening isolation.

With Israel, public intellectual Daniel Gordis offers us a brief but thorough account of the cultural, economic, and political history of this complex nation, from its beginnings to the present. Accessible, levelheaded, and rigorous, Israel sheds light on the Israel’s past so we can understand its future. The result is a vivid portrait of a people, and a nation, reborn.

Dr. Daniel Gordis is Senior Vice President and the Koret Distinguished Fellow at Shalem College in Jerusalem. He writes a regular column for the Jerusalem Post and is also a regular columnist for Bloomberg View. The author of numerous books on Jewish thought and political currents in Israel, and a winner of the National Jewish Book Award, Dr. Gordis was the founding dean of the Ziegler School of Rabbinic Studies at the University of Judaism. He has also served as vice president of the Mandel Foundation in Israel and director of its Leadership Institute.

“The author loves his adopted homeland without ignoring its blemishes. He treats the most contested episodes in Israeli history, such as the plight of both Arab and Jewish refugees during the 1948 War of Independence, honestly and fairly.” — Wall Street Journal

“Gordis is determined to do his best to provide some to those who don’t know as much about Israel as they think they know, or as much as they need to know.” — New York Post

“You will enjoy the fluid motion of Gordis’s writing style, which somehow condenses thousands of details into memorable, thought-provoking passages. . .. Gordis grants us more than a peek at the past and present.” — San Francisco Book Review

“Gordis brings to life the colorful patchwork of Israeli society and all those whose work helped shape it. . . . His writerly feat is in making so much so vivid through straightforward prose. . . . Certain to become a standard work.” — Commentary

“Gordis guides readers through all of this and much more, with a blend of energy and grace, brain and heart in mutual embrace.” — Jewish Book Council

“A welcome new primer, just in time for a new generation of English-speakers who are interested in Israel, to learn about the country and its struggles.” — Jerusalem Post

“This will serve as a fine introduction to this tiny but vitally important nation.” — Booklist

“An excellent introduction for anyone with a new or ongoing interest in Israel. A comprehensive bibliography serves as a guide to further reading.” — Library Journal

As the title promises, he delivers a concise, readable history that celebrates its subject without idealizing it. It’s a book that belongs on the shelf of every believer in the Zionist dream.” — Atlanta Jewish Times

“Gordis has an ability to get to the core of issues and to discuss them in straightforward language that nevertheless conveys sophisticated analysis. . . . Gordis’s concise history of Israel fills an urgent need.” — Washington Free Beacon Review

“Gordis shows how Israel has battled the odds for decades.” — The American Thinker

“Like Israel itself, Daniel Gordis’ Israel is audacious, intensive and unique. It tells the breathtaking story of the third Jewish commonwealth from the very beginning to today. Anyone interested in the history of Zionism will find priceless information and profound insight in this much needed, fair and balanced book.” — Ari Shavit, author of My Promised Land

“Gordis has written a luminous history that tells the story of Israel not only through its statesmen and warriors but its artists and writers and poets. Gordis gives us the soul of Israel, and helps explain why the most hated country on the planet is also among the most beloved.” — Yossi Klein Halevi, author of Like Dreamers: The Story of the Israeli Paratroopers Who Reunited Jerusalem and Divided a Nation

“A fascinating, accessible, nuanced, and smart account of a complex story, this book should be required reading for anyone who wants to understand this complicated corner of the world.” — Deborah Lipstadt, author of Denial: Holocaust History on Trial and Dorot Professor of Modern Jewish History and Holocaust Studies at Emory University

“Gordis captures the essence of who Israel is, where it has come from, and why the Jewish state will—and must—continue to exist. When I am asked “Is there one book to read about Israel?”, I now have an answer.” — Ambassador Dennis Ross, Special Middle East coordinator under President Bill Clinton and author of The Missing Peace: The Inside Story of the Fight for Middle East Peace

“Israel the book is an extraordinary reminder that Israel the county, with its new language, secular culture and unparalleled achievements, is nothing short of a man-made miracle.” — Talia Carner, author Hotel Moscow and Jerusalem Maiden

“Daniel Gordis combines encyclopedic knowledge with the writing talent of a novelist. He makes complex historical events accessible as he spans the whole sweep of Israel’s history, explaining how and why the rebuilding of the Jewish state in the twentieth century has transformed Jewish history forever.” — Rabbi Joseph Telushkin, author of Jewish Literacy, A Code of Jewish Ethics, and Rebbe

“Gordis weaves anecdote with historic judgment, and effectively uses both literary sources and introductions to Israel’s formative personalities to reflect on Israel’s history, its politics and especially, its soul. Israel is vibrant, articulate, and replete with wisdom.” — Ilan Troen, President of the Association for Israel Studies