From Every End of This Earth: 13 Families and the New Lives They Made in America (Paperback) 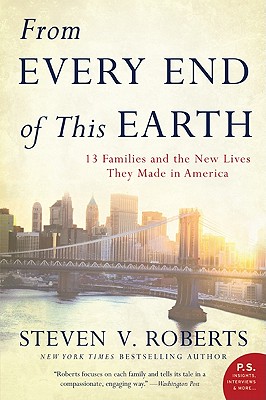 By Steven V. Roberts
Please email or call us for pricing on this book.

“[An] homage to the sacrifice generation and the children for which they make that sacrifice. . . . Roberts offers not only diversity of geography, but also diversity of experiences. . . . Roberts focuses on each family and tells its tale in a compassionate, engaging way.” — Washington Post

New York Times bestselling author Steven V. Roberts follows the stories of thirteen immigrant families in an in-depth look at immigration in America today—and how the melting pot has drastically changed over the past several decades.

New York Times bestselling author Steven V. Roberts follows the stories of immigrant families in From Every End of This Earth, a poignant and eye-opening look at immigration in America today. He captures the voices of those living the promise of a new land—and the difficulties of starting over among strangers whose suspicions increasingly outweigh their open-armed acceptance. As the political debate rages on, Roberts sheds light on the enormous contributions immigrants continue to make to the fabric and future of America.

Steve Roberts has been a journalist for more than fifty years. He is the author of My Father’s House and From This Day Forward, which he cowrote with Cokie. He is the chief political analyst for the ABC radio network, a professor of journalism and politics at George Washington University, and a nationally syndicated columnist. He lives in Cokie’s childhood home in suburban Washington, which he and Cokie shared for forty-two years.

“[An] homage to the sacrifice generation and the children for which they make that sacrifice. . . . Roberts offers not only diversity of geography, but also diversity of experiences. . . . Roberts focuses on each family and tells its tale in a compassionate, engaging way.”
— Washington Post

“For his entire writing life, Steve Roberts has been inspired by the extraordinary heroism and exceptional wisdom of supposedly ordinary people, especially new arrivals to our shores. For Roberts, there are no ‘ordinary’ people, and FROM EVERY END OF THIS EARTH is testimony to his passion and his empathy and also to his admiration for those with the courage to journey to a new land. The phrase ‘immigration debate’ is deadening. Roberts brings to life the real immigration story through the lives of those who are its authors.”
— E.J. Dionne, syndicated columnist and author of Why Americans Hate Politics

“If you want to feel optimistic about the future of America, give Steve Roberts’ new book a read. He chronicles our national miracle of drawing together and assimilating diverse people who are drawn, as the title says, ‘from every end of this earth.’ Far from posing a threat, the new immigrants—with their hustle and drive and their yearning for success—are America’s secret weapon in the global economic competition.”
— David Ignatius, syndicated columnist for The Washington Post

“Calls to mind a kinder, gentler time. . . . Brings back a time when children were able to entertain themselves, when imagination rather than television ruled, a time of rare and wonderful innocence. . . . With much the same sweet, self-deprecating tone of fellow journalist Tim Russert’s Big Russ and Me, Robert recalls growing up Jewish in New Jersey, in a community where everyone looked out for one another. . . . In this endearing book, treasured family stories are passed along from generation to generation, along with a strong sense of the American dream and all its attendant possibilities. . . . The greatest tribute a son can offer.”
— New Orleans Times-Picayune

“When a memoir is penned by a familiar figure, it’s all the more interesting to walk through the door that’s been opened into childhood. . . . This is a warm and thoughtful book about family values and a valued family.”
— Hartford Courant

“Taking the boy out of Bayonne may be possible, but taking Bayonne out of the boy is not—at least, according to this warm and welcoming memoir by journalist Roberts, who hails from the New Jersey city. . . . As he makes clear in this memoir, his Bayonne beginnings greatly informed the man he is today. Recommended.”
— Library Journal