The Foreign Student: A Novel (Paperback) 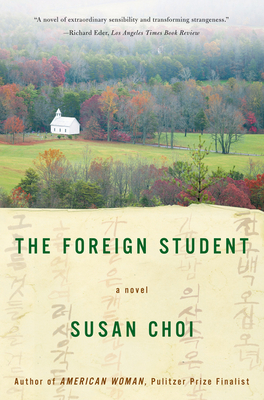 By Susan Choi
Please email or call us for pricing on this book.

"This wonderful hybrid of a novel--a love story, a war story, a novel of manners--introduces a writer of enchanting gifts, a beautiful heart wedded to a beautiful imagination. How else does Susan Choi so fully inhabit characters from disparate backgrounds, with such brilliant wit and insight? The Foreign Student stirs up great and lovely emotions."  — Francisco Goldman, author of The Ordinary Seaman

The Foreign Student is the story of a young Korean man, scarred by war, and the deeply troubled daughter of a wealthy Southern American family. In 1955, a new student arrives at a small college in the Tennessee mountains. Chuck is shy, speaks English haltingly, and on the subject of his earlier life in Korea he will not speak at all. Then he meets Katherine, a beautiful and solitary young woman who, like Chuck, is haunted by some dark episode in her past. Without quite knowing why, these two outsiders are drawn together, each sensing in the other the possibility of salvation. Moving between the American South and South Korea, between an adolescent girl's sexual awakening and a young man's nightmarish memories of war, The Foreign Student is a powerful and emotionally gripping work of fiction.

Susan Choi was born in Indiana and grew up in Texas. Her first novel, The Foreign Student, won the Asian-American Literary Award for Fiction and was a finalist for the Discover Great New Writers Award at Barnes & Noble. With David Remnick, she edited an anthology of fiction entitled Wonderful Town: New York Stories from the New Yorker. She lives in Brooklyn, New York.

“A novel of secrets that unfold like the leaves on an artichoke. The Foreign Student is a mosaic of betrayal in peace and war that marks the debut of a gifted young novelist wise beyond her years.” — John Gregory Dunne

“A luminous and accomplished first novel . . . that resonates with compassion-turned-ardor and an addictive melancholy vibrating beneath every line.” — Houston Chronicle

“A powerful and involving book....[written in] a style that can accommodate both the broad forces of history and the most intimate of lives.” — Lamar Herrin, author of The Lies Boys Tell

“A young war-shocked Korean man falls for a comely southern belle with secrets of her own in Susan Choi’s elegantly wrought first novel, The Foreign Student.” — Vanity Fair

“An accomplished, perceptive novel, which invites rereading and lingers in the reader’s memory.” — Booklist

“An auspicious debut novel . . . epic in its harrowing accounts of war and intimate in its charged descriptions of the unlikely love affair at its center.” — The New Yorker

“Choi’s descriptions are strange and powerful....The Foreign Student‘s plot is carefully orchestrated and camera-ready. It takes a war, an epistolary betrayal, and a natural disaster to effect a kiss.” — New York magazine

“Richly detailed. . . . Moving from the present to the past, from America to Korea, Choi brings hundreds of small scenes to life.” — New York Times Book Review

“Susan Choi has written a first novel of extraordinary sensibility and transforming strangeness. Her prose has the feel of a handmade artifact, oddly bumpy at times and startlingly expressive.” — Los Angeles Times Book Review

“Two very unlikely worlds intersect in The Foreign Student, war-ravaged Korea and the genteel culture of Sewanee, Tennessee. In gracious prose, Susan Choi renders their cruelties, their lies, and their beauty.” — Arthur Golden, author of Memories of A Geisha