Never Mind the Pollacks: A Rock and Roll Novel (Paperback) 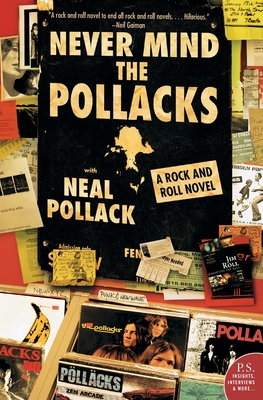 By Neal Pollack
Please email or call us for pricing on this book.

The most important document in the history of rock 'n' roll since the liner notes to Killroy Was Here.(This paperback includes a new P.S. section with author interviews, insights, features, suggested readings, and more.)

Never Mind the Pollacks, the first novel from acclaimed humorist Neal Pollack, is an epic history of rock-and-roll told through the eyes of two rival rock critics. The novel spans the decades from the 1940s to the present day, and includes such real-life characters as Elvis Presley, Bob Dylan, Joan Baez, Lou Reed, Iggy Pop, Bruce Springsteen, Joey Ramone, Patti Smith, Kurt Cobain, and many more. Pollack deploys his trademark roasting of literary pomposity, but his narrative transcends mere parody to become full-fledged social satire. He takes on the icons of popular music and their biographers, true-life rock books and historical fiction. There has never been a book quite like this one, particularly since it contains more than two-dozen original songs written by the author.

The life story of the book's main character, "Neal Pollack," is uniquely American. The only son of Jewish immigrant parents, he shows an aptitude early in life for rock criticism. Prodded by the legendary Sam Phillips and haunted by a ghostly, mysterious blues man, deeply disturbed by his mother's illegitimate marriage to Jerry Lee Lewis, he leaves his Memphis boyhood behind to become a folk troubadour in Greenwich Village. Six broken hearts, two liver transplants, and a lot of cocaine orgies later, he meets his ultimate destiny in a surprise ending that will shock anyone who wasn't paying attention to the early chapters. With Never Mind the Pollacks, Neal Pollack establishes himself as one of the most important novelists of his generation who isn't named Jonathan.

Neal Pollack is the author of the bestselling memoir Alternadad and several books of satirical fiction, including The Neal Pollack Anthology of American Literature and the rock novel Never Mind the Pollacks. He lives in Los Angeles with his wife and son.

“Neal Pollack is the Norman Mailer of his generation, and Never Mind the Pollacks is his The Executioner’s Song.”
— Janeane Garofalo

“Neal Pollack’s singular method of deconstructing the popular culture is smart and knowing and pitiless and entertaining.”
— Kurt Andersen, author of Turn of the Century

“Neal Pollack seems to understand rock journalism better than virtually everyone who gets paid to do it for a living.”
— Chuck Klosterman, author of Sex, Drugs, and Cocoa Puffs: A Low Culture Manifesto and Fargo Rock City

“A warped, literate, wildly original and perfectly executed satire that somehow reminds me of A Confederacy of Dunces: The Musical.”
— Augusten Burroughs, author of Running With Scissors and Dry